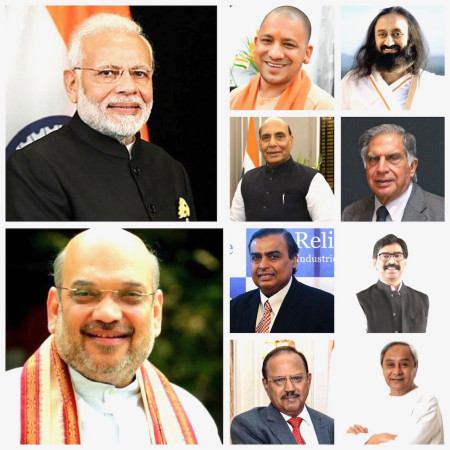 New Delhi: The list of ‘50 Most Influential Indians’ compiled by Fame India Magazine and Asia Post is based on a survey of 12,000 respondents across India. With 99.6 percent people voting/giving views in his favour, Prime Minister Narendra Modi is the most influential Indian and a mass leader.

If we ask you to find a platform that has Prime Minister Narendra Modi, Jharkhand CM Hemant Soren, Kerala CM P. Vijayan,  Mukesh Ambani ,  Ratan Tata & Ravish Kumar together in it, then you may certainly have a tough time in doing it. But we have one for you.  Fame India Magazine
and Asia Post  have together compiled a list of ‘50 Most Influential Indians.’

“The list is based on a survey that saw 12,000 respondents take part. These respondents, chosen from across the social, intellectual and professional lines included writers, artists, bureaucrats, senior journalists, social activists and businessmen. The man who has topped the list should not come at all as a surprise because he is not just the most influential Indian in India at this time but probably most influential Indian in the world, Prime Minister Narendra Modi. With 99.6 percent people voting/giving views in his favour, he is the most influential Indian and a mass leader,” informed Dr. Sandeep Marwah Chancellor AAFT University of Media And Arts and part of Fame India Selection Board.

Hindi heartland Uttar Pradesh’s Chief Minister Yogi Adityanath has been liked by 97 percent of the respondents for his honest image and administrative qualities. Home Minister Amit Shah gets thumbs up from 96.5 percent for his determination, ability to take tough decisions and implement them. India’s well-known industrialist Ratan Tata has secured the fourth position with 95.2 percent votes. Mostly, people chose him on the basis of his social responsibility and astute entrepreneurial abilities. The fifth is Reliance Industries Chairman Mukesh Ambani, the richest man in India. He was chosen by respondents primarily for his contribution towards making the power of the Internet grow deeper in society.

For his efforts towards successfully containing COVID-19 spread in the state, Kerala Chief Minister gets the sixth position. Sri Sri Ravishankar, spiritual leader and messenger of world peace secured the seventh position. Defense Minister Rajnath Singh has successfully made to the top 10. Respondents voted him for his clean image and efforts towards self-reliant India in defense manufacturing. The man of all seasons, NSA Ajit Doval, has secured the ninth spot, while Odisha chief minister who enjoys a great connect with common people, Naveen Patnaik comes 10th on the list. PM Modi’s handpicked man PK Mishra, his Principal Secretary is on the 11th position for his managerial skills and effective execution. The young and effective Chief Minister of Jharkhand, Heman Soren, is the 12th, and Delhi CM Arvind  Kejriwal has found the 13th place on the list.

Editorial director of Fame India Magazine, US Sonthalia on the preparation of the list said “There were a total nine heads including personality, impact, vision, image, pro-development outlook and efforts towards upliftment of the society under which we have carried out the survey to select these 50 most influential Indians of 2020. The number of respondents was around 12000 which includes people from the varied field like social work, theatre, cinema, art, journalism, industry, commerce and cooperative. Fame India’s objective behind acknowledgement of such people is to set a high-performance standard for the rest in the society”.

Founder of AAFT Sandeep Marwah said “These 50 Indians are the torch-bearers of the New India that we think of creating. The price of success is hard work, dedication to the job at hand, and the determination that whether we win or lose, we have applied the best of ourselves to the task at hand. These people are the living example of it”.

Nitin Gadkari, the Union Minister who will always talk of growth, development and is known to be the man of his words, is 14th. For making positive reforms in Railways, Piyush Goel gets the 15th rank. ‘Sushasan Babu’ Bihar Chief Minister Nitish Kumar is the 16th for his pro-development governance in the state. Former health minister and BJP’s national president JP Nadda is the 17th, current Health Minister Dr Harshvardhan is the 18th, Lok Sabha speaker Om Birla is the 19th, while Baba Ramdev who has taken ‘swadeshi’ to new heights is the 20th influential man on this list.

NDA secured 37.36 percent votes in 2019 Lok Sabha polls and got 303 seats. While Rahul Gandhi-led UPA got 19.01 percent of the total turnout and managed to take the tally to 52. The brighter side UPA got eight more seats than 2014. Rahul Gandhi, being the face of the largest Opposition party, secured the 21st spot. Isha foundation’s head spiritual leader Sadguru Jaggi Vasudevan is 22nd. Bollywood star Akshay Kumar is 23rd. Union Minister for Parliamentary Affairs and Coal & Mines Pralhad Joshi has started a wave of reforms in the sector and thus gets 24th position, while Union Agriculture Minister Narendra Singh Tomar is 25th on the list.

Chief Minister of Goa and the suave politician Dr Pramod Sawant is 26th, Punjab Chief Minister and man of action Captain Amrinder Singh is 27th, Minister of State (IC) for Power and Renewables RK Singh is 28th and effective bureaucrat Ajay Bhalla (IAS) is the 29th on the list. The 30th on the list is Health Secretary Priti Sudan (IAS) who has been hitting headlines for all the good reasons of late. Dr Ajay Kumar (IAS), who has been immensely effective as Secretary Defence Manufacturing and Secretary Defence, has secured the 31st spot. India’s first Chief of Defence Staff General Bipin Rawat, the industrialist Gautam Adani, Pharma giant Cadila’s owner Pankaj Bhai Patel, Sajjan Jindal, Founder of Avenue SuperMarts Radha Krishna Damani, T-Series’ Bhushan Kumar, Industrialist much accessible to common people Anand Mahindra, Sulabh International’s founder Dr Bindeshwar Pathak and IFFCO’s MD & CEO Dr US Awasthi have been placed between 32nd to 40th in the list. Dr Awasthi is the only name from the cooperative sector to have made it to the list.

An IAS officer of 1987 batch (MP cadre) and Managing Director of Tribal Cooperative Marketing Development Federation of India Ltd (TRIFED) Pravir Krishna gets the 41st spot on the list. Krishna has the credit of steering the federation towards profitable avenues. Secretary Biotechnology department Renu Swarup (IAS), ISRO president K Sivan and Director of the National Institute of Virology Priya Abhraham have made it to the 42nd, 43rd and 44th spots in the list, respectively. On the 45th position in the list is PayTM Founder & CEO Vijay Shekhar Sharma. Apart from having been featured in the Time Magazine’s list of 100 Most Influential People, Sharma also has India’s digital payment revolution to his credit.

ICMR’s Dr Nivedita Gupta who has played a crucial role in strategic planning to augment the testing capacity for COVID-19 in India is the 46th on the list. AIIMS director Dr Randeep Guleria, Editor-in-Chief of Hindustan newspaper Shashi Shekhar, Magsaysay awardee journalist Ravish Kumar and Founder-Owner of Republic TV Arnab Goswami have secured the 47th, 48th, 49th and 50th spots on the list of most influential Indians 2020, brought to you exclusively by Fame India with Asia post as the research partner supported by AAFT University of Media And Arts.