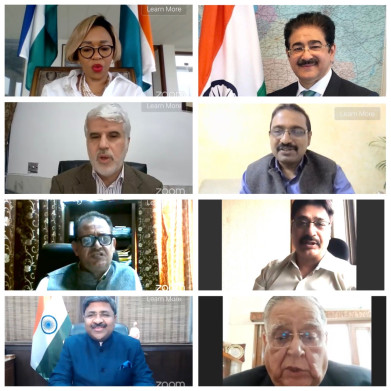 “The responsibility of the journalist is bigger than any other citizen of the country. What you write or show as news definitely effects the minds and hearts of people. Never over exaggerate to create sensation in the community. Journalism can bring    lots of love peace and unity if it is handled properly,” said Lt. Gen. K.M. Seth the former Governor of Chhattisgarh on the inauguration of 9th Global Festival of Journalism Noida 2021 but this time online.

I congratulate IJC and ICMEI- International Chamber of Media And Entertainment Industry for such an exclusive international event covering almost all the countries of the World. I am happy that I am part of this inauguration function where love Peace and Unity is discussed which is need of the hour,” said H.E. Lino Irene Molise Mabusela High Commissioner of Lesotho Kingdom.

“We need not to change the definition of Journalism. Let journalist be the real informer of news. You lose love, peace and unity when wrong reporting is done without research. Lets join together to create a better world through simple representation of facts and not false news,” added Kunwar Shekhar Vijendra Chancellor of Shobhit University.

“Journalism teaching and learning needs a very cautious attention. There is a huge difference between just a writer and the journalist, and the distinction is awareness &   responsibility,” said Prof. K.G. Suresh Senior Journalist and Vice Chancellor of Makkhanlal Chaturvedi University.

Giving examples of wrong and propagative reporting Mohd. Ali Rabbani Cultural Counselor of Embassy of Iran expressed that journalism is not only the oldest but most responsible profession on earth.

The event was live to more than 1.5 million people through social media and attended by more than thousands of journalists’ members of International Journalism Centre. The event was supported by WPDRF-World Peace Development And Research Foundation, School of Mass Communication And Journalism of AAFT University of Media And Arts.