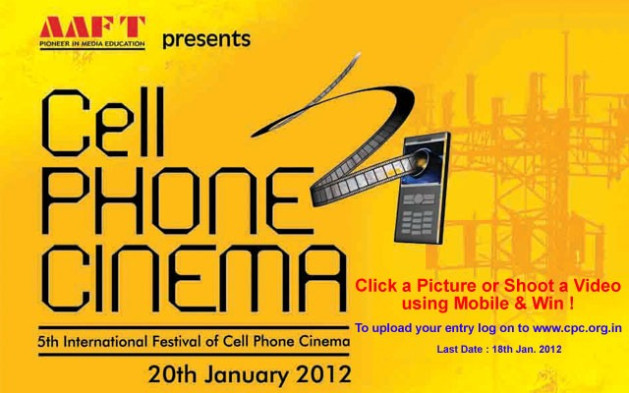 With the popularity of International Festival Of Cellphone Cinema all over the World many national and international organizations have come forward to join 5th edition of the festival to be held on 19th and 20th of January at Marwah Studios, Film City Noida. 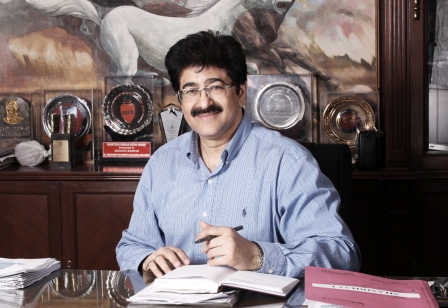 â€œWe are excited with the reach of 4th Global Film Festival Noida 2011, as the number of important and popular international organizations have started joining this great international festivalâ€ said Sandeep Marwah President of 4th GFFN.

The ten thousand media family of Asian Education Group including alumni of (AAFT) Asian Academy Of Film And Television, (ASMS) Asian School Of Media Studies and (ABS) Asian Business School will be participating in the event this time. 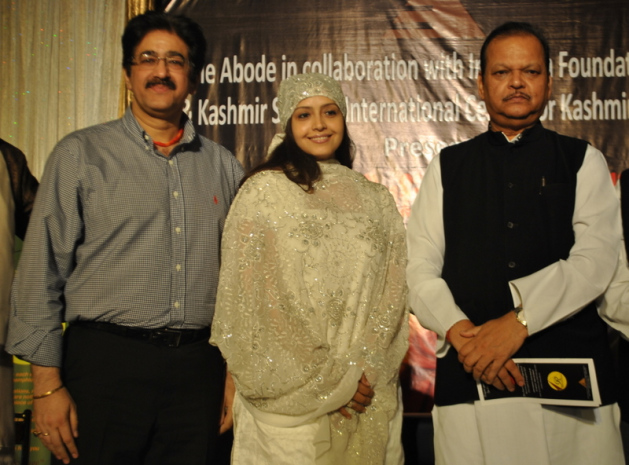 We are planning to start a Sufi Circuit in India which will not only promote Sufism but also bring thousands of tourists to better destinations in the countryâ€ said Subodh Kant Sahay Union Minister of Tourism, Government of India while inaugurating the First International Sufi Festival at Ajmer.

â€œWe have already developed medical tourism and the biggest tourism in India is the religious tourism. Millions of people move from one place to another for the darshans of different religious places. We need to give now more emphasis to the sameâ€ Sahay added.

â€œSufism teaches us Humanity, and every religion ultimately brings back to be a good human being. Let us change our thinking and feelings to work honestly to convert and renovate this earth into heavenâ€ said Sandeep Marwah President Marwah Studios and Chairperson World Peace Research And Development Foundation.

Gulsha Begum the festival director expressed her desire to have many Sufi festivals in different cities of the country to unite India through Sufi Music. The inauguration was followed by speeches by Religious Leaders and dynamic performance by Sufi music group from Dargah of Ajmer and a group specially flown from Egypt. 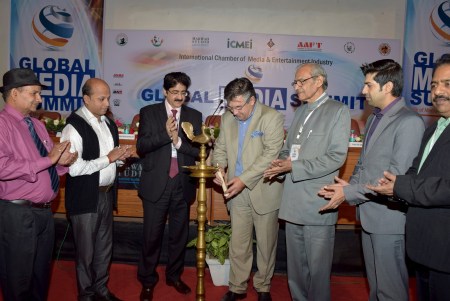 New Delhi: â€œGlobal Media Meet is designed to bring out all those points which probably an ordinary reader or viewer cannot predict as a customer of media. He is influenced by the tricky news and get emotional on wrong information,â€ said Sandeep Marwah President of Marwah Studio in the first session organized by International Chamber of Media and Entertainment Industry at Marwah Studio, Film City Noida.

â€œPeace do exist in the World. The more you are close to the nature the more you realize the peace, which is state of mind. Whenever there is difference of opinion it destroys peace and take the shape of irritation and restlessness,â€ said H.E. Dr. Sabit Subasic Ambassador of Bosnia And Herzegovina to India while inaugurating the Global Media Summit.

A short film on Padmashri Dr. Shyam Singh Shashi directed by Raghav Marwah was released by Dr. Sabit Subasic the Ambassador of Bosnia And Herzegovina Present on the occasion Dr. Shyam Singh Shashi a writer of more than 400 books extended his lifetime services towards maintaining peace in the nation. A poster of 8th Global Film Festival Noida was also launched by the dignities.

Noida: â€œMarwah Studio is the pillar of Entertainment Industry of India. I am impressed by the activities of the Centre. I am feeling important to release the poster of the most prestigious film festival of the nation,â€ said H.E. Dr. Sabit Subasic Ambassador of Bosnia And Herzegovina to India while releasing the new poster of 8th Global Film Festival Noida 2015.

â€œGlobal Media Summit is the right time to announce another International media activity,â€ added Dr. Shyam Singh Shashi. We will turn very soon Global Film Festival to the most entertaining festival of the World said Ashok Tyagi who is the festival Director of GFFN.

â€œGFFN will soon specify not only Noida, New Delhi, NCR but North India,â€ said Sandeep Marwah President Marwah Studio and Festival President GFFN. â€œAs it is we are the biggest film festival of North India,â€ he added.

The event was attended by large number of foreign delegates present on the occasion of Global Media Summit and film, television and media students from all over India.

Sandeep Marwah has been the World Record Holder and has produced largest number of short films in the World. He has given opportunity to 2300 directors and approximately 10,000 artist and technicians from more than 100 countries to work in these films informed Sushil Bharti Director International Chamber of media And Entertainment Industry.

Dr. Shyam Singh Shashi is the writer of more than 400 books in Hindi and English. His books have been translated in different languages also. He has been the Chancellor of International Roma Cultural University, Belgrade, Serbia. His research and contribution towards Romani is worth praising.

I am indebted to Raghav Marwah for making film on me, his efforts have added to my reputation said Shyam Singh Shashi who started his carrier as senior officer in Ministry of Information And Broadcasting Government of India.

â€œIt was great pleasure to work with the great personality. I am motivated to make more films in this seriesâ€ said Raghav Marwah. Dr. S.K.Dutta, Dr. A.K.Srivastava, Ashok Tyagi, Naved Qureshi were also present on the occasion. 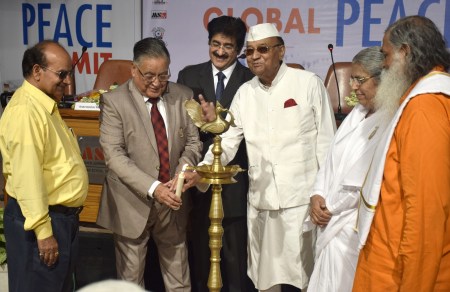 Noida: The Global Peace Summit planned by World Peace Development And Research Foundation of Marwah Studio was one of the most successful step ever taken by the private organization in the country.

The curtain raiser was organized few days earlier, which has 29 delegates from 12 countries. This time 60 delegates participated from 30 countries of the World including government officers, chambers, media persons and people from all strata of life.

â€œNo War Means Peace. Emphasis on brotherhood, and feeling for mankind will bring all countries close to each other,â€ said H.E. Gen K.M. Seth former Governor of Chhattisgarh while inaugurating the Peace Conference.

â€œDeveloping business relations and economies will not let you hate each other, people of other countries will have more respect for each otherâ€ said H.E. Syed Sibtey Razi former Governor of Jharkhand.

â€œLove And Emotions can win the World. Start developing peace within you. You will be more calm and sharp,â€ added H.H. Brahm Kumari Ashalata Director of Brahm Kumari a spiritual organization. â€œWe are son and daughters of the same almighty, why need to fight and destroy mankind for no rhyme and reasons â€œ from Jaipur.

â€œWe have always believed that World is one family, one place to live and one Godâ€ said Sandeep Marwah who introduced the concept of Peace to the delegates from 30 countries of the World including Russia, Bahrain, Malawi, Niger, Nigeria, Sudan, Uganda, Tanzania, Nepal, Myanmar, Ukraine, Sri Lanka and Mauritius. 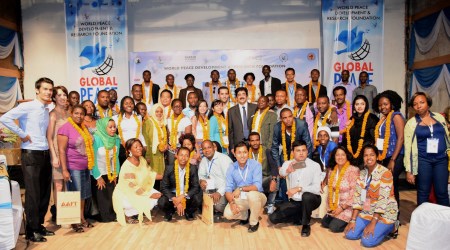 Noida: The delegates from 30 countries of the World were the participants in the Global Peace Summit who were impressed by the initiative taken by World Peace Development And Research Foundation.

â€œWe are media persons and we feel that our responsibility towards nation building is much more than any citizen of the country. We have to take initiative in every angle of life so that many can follow the path of progressâ€ said Sandeep Marwah five times World Record Holder in media and president of WPDRF.

All the participants were given an opportunity to speak on the subject. More than 60 delegates from 30 countries of the World participated in the conference and shared views on peace.

Later Sandeep Marwah handed over the life membership of World Peace Development And Research Foundation along with the memento of the summit to every foreign delegate present there. The foreign delegates coming from 30 countries include Germany, Nepal, Sri Lanka, Afghanistan, Bahrain, Niger, Nigeria, Uganda, Sudan, Tanzania, Morocco, Cameroon, Ukraine, Russia, Myanmar and Indonesia. 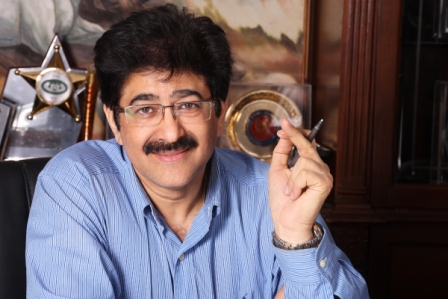 3rd Global Summit on Entertainment and Media Focus 2009 of Assocham came to the conclusion that we may be global as far as Indian Film Industry is concerned but still we have to take many measures to be known to rest of the world. Conducting and handling the 3rd seminar of the first day, S.M.Khan, the Director of Directorate of Film festivals of India, Ministry of Information and Broadcasting, Government of India said Â â€œto attract foreign film makers into our festivals Government of India has announced a prize for 40 lacs for the best film, which is highest in the World. The seminar was attended by Madhur Bhandarkar, Ashok Pandit, Mukesh Tyagi, Nevllie Tuli, Hiren Gada, Geetanjali Sehgal and known media personality Sandeep Marwah.
The show stopper was Sandeep Marwah who alone with great enthusiasm discarded the views of the other speakers who were not earlier convinced that Indian films and entertainment industry is now Global. Relating poetry to the current situation he won the applause of the audience to maximum.
â€œWe need to improve a lot on our marketing techniquesâ€ said Madhur Bhandrakar, â€œWe are behind as far as our subjects are concernedâ€ said Ashok Pandit. â€œWe still have to nourish our talent to an international standardâ€ said Mukesh Tyagi. â€œEven after all these drawback our films are watched by two sixth of the World, Indian songs are accepted every where, Industry is still growing, we are still getting awards every festival and competitions, Indian Films are watched with great interest ,Indian artist are appreciatedâ€ said Sandeep Marwah while giving Â ample current examples. Later Sujata Dev paid vote of thanks to the panelist.

Sandeep Marwah is already the Ambassador of International Human Rights Organization affiliated to United Nations; he is also the President of Association of Asian Union, World Peace Development And Research Foundation and many related organization working towards World Love, Peace and Unity proposed Chandrakant Patil Kharare.

Sandeep Marwah deserves to be the World Peace Ambassador who has spent his life in uniting all the countries of the World through art and culture. His latest venture of International Chamber of Media And Entertainment Industry also propagates love, Peace and unity through art and culture. ICMEI has 162 international committees, 80 national committees and contact office in 110 countries of the World.

A unanimous decision of nominating him again as the World Peace Ambassador was taken in the summit. H.E. Dr. Sabit Subasic Ambassador of Bosnia and Herzegovina and Padmashri Dr. Shyam Singh Shashi congratulated Sandeep Marwah.

â€œThe works of Sandeep Marwah are on the lines of Mahatma Gandhi, Nelson Mandela, Dalai Lama and other World leaders. I wish him all the best in his endeavorâ€added Dr. Shyam Singh Shashi.