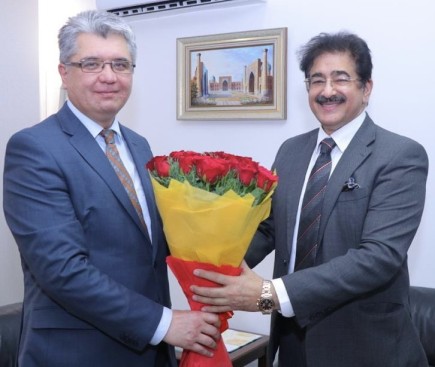 New Delhi: “It is a great pleasure and honor to present the Partonship of Indo Uzbekistan Film And Cultural Forum to H.E. Dilshad Akhtov Ambassador of Uzbekistan to India. I am sure we will be able to grow much faster under his leadership and guidance,” said Dr. Sandeep Marwah President of International Chamber of Media and Entertainment Industry while handing over the memento in a small function at Embassy of Uzbekistan.

“With great pleasure I accept to be the part of Indo Uzbekistan Film And Cultural Forum. Together we will be able to achieve better heights in developing and promoting relations between India and Uzbekistan through art and culture, “expressed Ambassador H.E. Dilshad Akhtov.

H.E. Dilshad finished his studies from The University of World Economy and Diplomacy (Tashkent/Uzbekistan) Moscow State Institute of International Relations. After providing his services to the nation for number of years he was nominated as the Ambassador Extraordinary and Plenipotentiary of Uzbekistan to Germany (also responsible for Switzerland, Czech Republic, Sweden and Spain).

Later he was nominated as Head of the Department for UN and International Organizations, Ministry of Foreign Affairs of the Republic of Uzbekistan, followed by