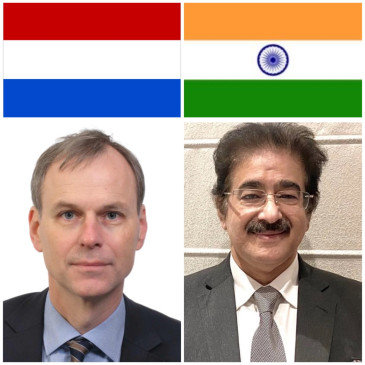 New Delhi: The Netherlands marks Kingdom Day on 15 December, the day on which Queen Juliana signed the Charter for the Kingdom in the Hall of Knights (Ridderzaal) in 1954.

“I on behalf of ICMEI, Media and Entertainment Industry and Art & Culture fraternity of India take this opportunity to extend my heartiest congratulations to H.E. Marten Van den Berg Ambassador of Netherlands to India and the people of Netherlands on the Kingdom Day which falls on 15th December,” said Dr. Sandeep Marwah President of International Chamber of Media And Entertainment Industry on the celebration of Kingdom Day at ICMEI.

“We are happy that recently we have created Indo Netherlands Film And Cultural Forum and has been developing and promoting the relations between India and country of Netherlands. We are looking for the opportunity to nominate H.E. Marten Van den Berg the Ambassador Netherlands as Parton of the forum,” added Dr. Sandeep Marwah as Chair of INFCF.