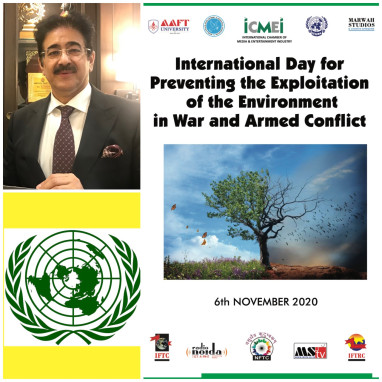 NOIDA: “Though humanity has always counted its war casualties in terms of dead and wounded soldiers and civilians, destroyed cities and livelihoods, the environment has often remained the unpublicized victim of war. Water wells have been polluted, crops torched, forests cut down, soils poisoned, and animals killed to gain military advantage,” said Dr. Sandeep Marwah President of ICMEI at a session conducted by Environment Committee of ICMEI in association with AAFT University and World Peace Development And Research Foundation.

“The United Nations attaches great importance to ensuring that action on the environment is part of conflict prevention, peacekeeping and peace building strategies, because there can be no durable peace if the natural resources that sustain livelihoods and ecosystems are destroyed,” added Dr. Marwah who is also patron to IFUNA- Indian Federation of United Nations Associations.

On 5 November 2001, the UN General Assembly declared 6 November of each year as the International Day for Preventing the Exploitation of the Environment in War and Armed Conflict.