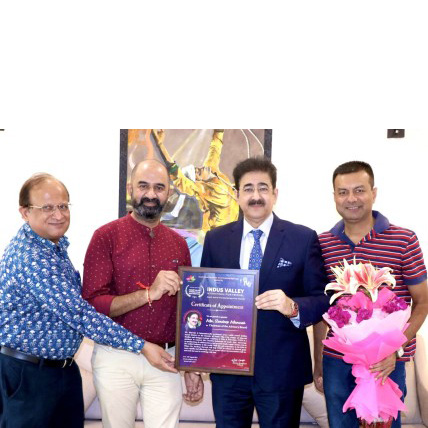 New Delhi: The founder of Noida Film City Dr. Sandeep Marwah has been unanimously selected as the Chairman for the Advisory board of Indus Valley International Film Festival ready for its second edition in New Delhi in the month of November 2021.

“It is our great pleasure and honor that the legend of media and entertainment industry Dr. Sandeep Marwah has accepted to be the Chair for the advisory board of Indus Valley International Film Festival. We are confident that the level of festival will now touch the new heights,” said Harsh Narayan the founder of festival.

The first edition of this ambitious Promethean event was held at New Delhi from 11th to 17th February, 2019. The second edition will also showcase films mainly from South Asian nations. The core charter of SAFACH is to encourage Creative & Artistic collaborations among all the South Asian countries. The  vision is to propagate the message of peace and harmony through films, which is the most popular media, and to facilitate efforts towards a more harmonious world.

“I am thankful to the management committee of Indus Valley Film Festival for trusting me for this post, I will leave no stone unturned to make it a better and popular festival,” said Dr Sandeep Marwah President of Marwah Studios.