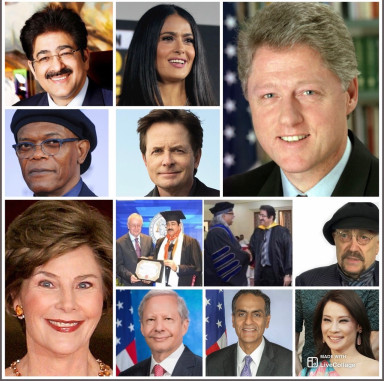 New Delhi: “I had been lucky to be in the invitee list of Bill Clinton then the President of USA for the get together at Hotel Maurya Sheraton organized during his visit to New Delhi, Republic of India. It was also great to receive the first lady of USA Mrs Laura Bush at Noida Film City which she planned during the official visit of President George Bush to India,” said Sandeep Marwah President of Marwah Studios & founder of Noida Film City while talking about cultural relations between India and USA.

Dr. Sandeep Marwah has been honoured by Tisch School of Arts as Father of Cellphone Cinema as he has been in mobile films from last fourteen years and made his first film with Karl Bardosh of Kanbar Institute of Film & Television of New York University, in Noida and New York. He is the first one to start festival of cellphone cinema.

Sandeep Marwah is also associated with the short film Smile Pinky which received Oscar during 81st Academy Award Function at Kodak Theater in Los Angles. The graphics and animations were handled by Marwah Studios.

Marwah Studios probably is the only organization from India which participated with National Center for Atmospheric Research invited by NASA, USA and associated with Scientific Academic Research Foundation headquarters in New York.

Dr. Sandeep Marwah also visited USA to research on tourism and was -representing a very powerful organization National Federation of Tourism And Transport Cooperatives of India Limited. Dr. Marwah was not only part of case studies but he is also the part of   two very popular books published and printed in USA namely The Complete Idiot’s Guide   to Digital Video and Thinking Through Digital Media-Transnational Environments.

On one side Dr. Marwah was honoured along with super stars of Hollywood like Salma Hayek, Lucy Liu, Samuel Jackson at Cairo International Film Festival and on the other hand he invited Hollywood stars like Michel J Fox, Jean Marie Lomour, Director Jeno Hodi, Terry Macluhan, producer Director Andrew G Vagina to his studios.

Recently India US friendship came into lime light when Charles Duke, tenth Man on the Moon from Apollo 16 addressed the students of AAFT and two million people were involved with the talk show.

It was another major development    in the relation between India and USA when Philip Kotler father of Marketing addressed the students of Asian Business School. AAFT has joined hands with Epic Bibble College and presented life membership of World Peace Development And Research Foundation.

Sandeep Marwah was again part of the research program of Swapnil Rai from Moody College of Communication University of Texas at Austin. Phyllis M Wise Chancellor of    University of Illions, Rodervick Harding of National Louis University are now part of Asian Education Group.