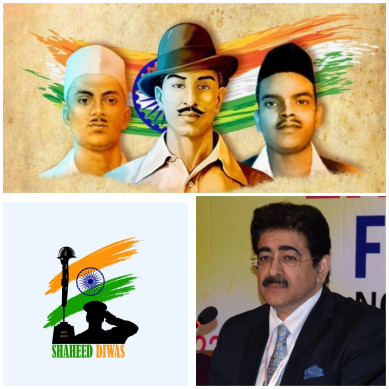 New Delhi; “Nothing is like respect for your country and for your country men. Every individual must be proud of his or her motherland. The country should always be the priority in the eyes of Indians. We have shed blood to get independence and peace. It is a day to remember the three great leaders of the  nation,” said Dr. Sandeep Marwah Chancellor AAFT University and Chair for Bhagat Singh Forum talking to the young Indians and reminding them of the sacrifice of three youth of the country at the time of Independence in a conference at Marwah Studios Film City Noida.

On March 23, the three freedom fighters- Bhagat Singh, Shivaram Rajguru and Sukhdev Thapar were hanged to death by Britishers. These heroes fought for the welfare of people and sacrificed their lives for the same cause. For many young Indians, Bhagat Singh, Rajguru, Sukhdev have become a source of inspiration. Even during the British rule, their sacrifice urged many people to come forth and fight for their freedom. Therefore, in order to homage to the three of these revolutionaries, India has commemorated March 23 as Shaheed Diwas.