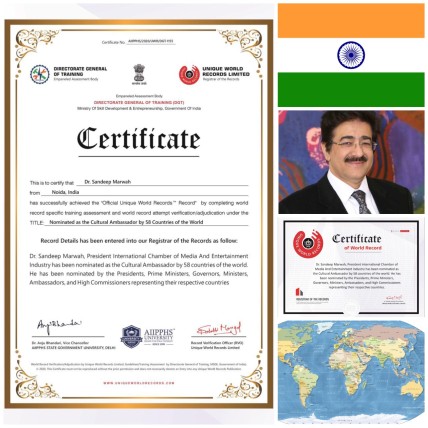 New Delhi: Dr. Sandeep Marwah has been in media, arts, and culture for almost forty years. His deep involvement with promotion of art and culture has brought him to the international platform. His untiring efforts of promoting people from all over the World attracted attention of large number of Governments of different countries.

Not only that Dr. Sandeep Marwah has been titled Icon of India, Man of Asia, Golden Boy of India, Global Media Guru, Global Cultural Minister in different International Summits, he has been honored as Global Cultural Minister even in House of Common London U K, Bavarian Parliament in Munich, Wales Parliament in Cardiff Wales. His profound commitment in environment protection got him Global Green Ambassador too.

Sandeep Marwah has been honored as Chair or Cultural Ambassador for Fifty Eight different countries of the World by either their Presidents, Prime Ministers, Governors, Union Ministers, Member Parliament and if not then by High Commissioners and Ambassadors on behalf of their country. No one in this World has been able to achieve this kind of position in any of the fields or disciplines.

“I am much obliged to Unique book of records for mentioning me in the Book of Records for being Cultural representative of 58 Governments of the World. I am putting my best and believe in bringing love, peace and unity through art and culture,” thanked Sandeep Marwah to the authorities.