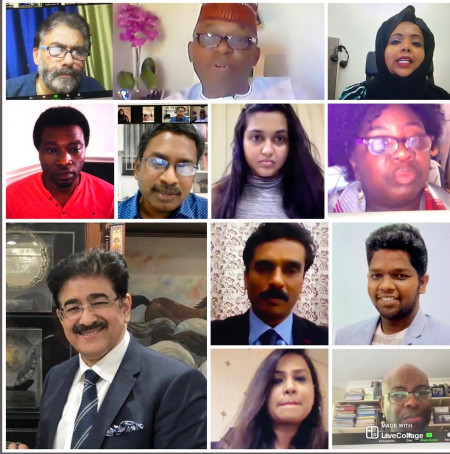 New Delhi: “We are 48 countries in Asia and another 54 countries in Africa and together we make half the World. With different political back rounds, ideologies and bringing up it is only art and culture which can bring us close to each other as culture is based on emotions; emotions have no language,” said Dr. Sandeep Marwah President of Marwah Studios while inaugurating the international conference organized by AASGON- Africa Asia Scholars Global Network to bring in unity between the Asian African countries.

“It is my proud privilege to be nominated and awarded as Global Cultural Minister by the AASGON-A Global organization now having offices in different parts of the World. AAFT University and Marwah Studios offer you a platform to plan an international event in India in continuation to all that you are already doing in other countries,” added Dr. Marwah.

For the common good, AASGON was established to promote good governance and purposeful education, protect, advance and maintain human capacity development, dignity, rights and values for a better, humane and fairer world.

“Appointed by the United Nations, the Africa Asia Scholars Global Network (AASGON) is a Signatory to the UN Global Compact and Member of the UK Stakeholders for Sustainable Development (UKSSD).

“AASGON is dedicated In its strive to consistently among others. ASSGON believes in sustaining  and extensively promote the Ten Principles of the UN Global Compact with respect to human rights, labour, environment and anti-corruption, and communicate regularly with its stakeholders on its engagement in the Global Compact and efforts taken to support the ten principles, as well as post this Communication on Engagement (COE) on the UN Global Compact website,” informed Dr. Abdul Dewale Mohammed President of the organization.